Cambodian PM Reaffirms Commitment Not Declare the State of Emergency 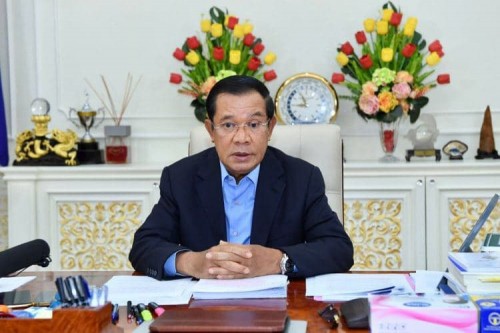 Prime Minister Samdech Akka Moha Sena Padei Techo Hun Sen has once again emphasised that Cambodia will not declare the state of emergency.
In his message to his compatriots being broadcast live from his residence in Takhmao town, Kandal province this morning, Samdech Techo Hun Sen reiterated that he had drafted all necessary documents for His Majesty the King over the declaration of the state of emergency, but he will not do so as it will greatly impact on the citizens.
Previously, the Premier said the national economy will be completely stuck if the whole country or some parts of the country are shut down. “But what we can replace, we’ll do so through the efforts of the authorities at all levels, especially the participation of our citizens,” he underlined.
As of this morning, the total number of confirmed cases in Cambodia rose to 362, including 41 locally transmitted community cases. Among them, 312 have recovered successfully and there is no fatal case.
Promulgated on April 29, 2020, the 12-article Law on the Management of the Nation in Emergency stipulates that a state of emergency is declared when the nation faces dangers such as war or foreign invasion, public health concerns caused by pandemics, serious chaos to national security and public order, and severe calamity threatening or causing nationwide dangers.