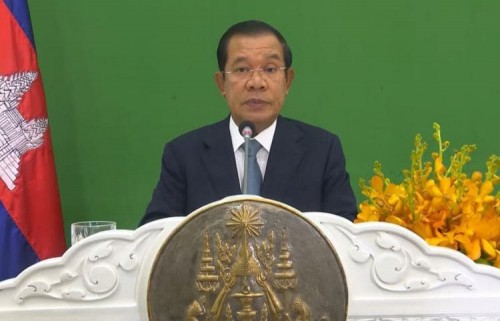 Cambodia is committed to fighting against climate change with clear and effective measures and strategies, although Cambodia has less greenhouse gas emissions at the global level.
The commitment was highlighted by Samdech Akka Moha Sena Padei Techo Hun Sen, Prime Minister of the Kingdom of Cambodia in his remarks at the “Leader-level virtual Climate Ambition Summit” held via Videoconference on Dec. 12, at the invitation of H.E. António Guterres, United Nations Secretary-General, H.E. Boris Johnson, Prime Minister of the United Kingdom, H.E. Emmanuel Macron, President of France, H.E. Sebastián Piñera Echenique, President of Chile, and H.E. Giuseppe Conte, Prime Minister of Italy.
“Even though Cambodia is emitting less greenhouse gas at the global level, the country is highly committed to solving the issue depending on its resources and capacity,” he said.
In its report on update of Nationally Determined Contributions (NDCs) to reduce national emissions and adapt to the impact of climate change to be submitted to the Secretariat of the UN Framework Convention on Climate Change (UNFCCC) at the end of this year, Cambodia will include a new and precise goal of reducing greenhouse gas emissions by 38.9 MtCO2e, comprising the fields of forestry, waste and agriculture or equivalent to 18 percent compared to usual scenario by the year 2030, he added.
The new goal will include the production of electricity from renewable energies by 25 percent of the country’ total power mix by 2030, Samdech Techo Hun Sen pointed out.
“Climate change is an interconnected phenomenon which needs to be addressed with collective and comprehensive means both on the social, economic, and environmental aspects,” he said. “Dealing effectively with the problems caused by climate change will contribute significantly to sustainable and inclusive socio-economic development in the future.”
The Cambodian Premier appealed to all countries to join hands and implement their respective obligations as stated in strategic plans, mechanisms, agreements in a highly responsible spirit.
“Cambodia has been committed to set forth in 2021 a long-term strategic plan to achieve the carbon neutrality. To carry out the long-term strategy successfully, Cambodia calls on all developed countries to fulfill their obligations pledged in terms of both financial support and technological transfer,” he said.
This “Leader-level virtual Climate Ambition Summit” provided the platform for Parties to the UNFCCC to announce ambitious new commitments relating to (1) new more ambitious nationally determined contributions; (2) long-term strategies setting out a pathway to net zero emissions; (3) climate finance commitments and (4) ambitious adaptation plans and underlying policies.