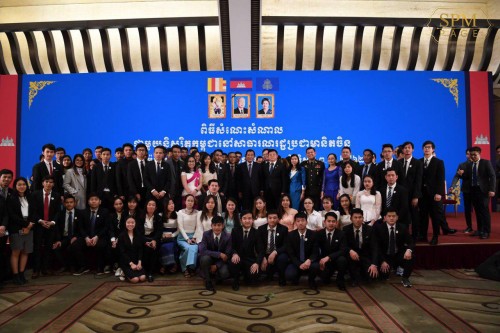 “During the visit, Prime Minister Hun Sen will call on H.E. Mr. Xi Jinping, President of the People’s Republic of China, H.E. Mr. Li Zhanshu, Chairman of the Standing Committee of the National People’s Congress and H.E. Mr. Wang Yang, Chairman of the Chinese People’s Political Consultative Conference, and hold bilateral meeting with H.E. Mr. Li Keqiang, Premier of the State Council. The talks will focus on further strengthening Comprehensive Strategic Partnership of Cooperation between Cambodia and China for the benefits of the two nations. A number of documents on bilateral cooperation are expected to be signed during the visit,” according to foreign affairs ministry’s press release.

While staying in China, Prime Minister plans to visit the Exhibition of the 40th Anniversary of the Reform and Opening-Up of China and preside over the opening session of the Cambodia-China Economic and Trade Forum 2019 and meet with Cambodian students.

Chinese Ambassador to Cambodia Wang Wentian spoke at a press conference on 16 January 2019 that the visit will deepen political trust and practical cooperation between the two countries as well as strengthen legal and cultural cooperation in the name of Comprehensive Strategic Partnership.

Ambassador Wang said that Prime Minister’s visit will focus on: (a) deepening political trust between the two countries; (b) enhancing bilateral trade and cooperation through Belt and Road and Rectangular Strategy of Cambodia; (c) expanding cultural exchanges on youth, culture, and tourism; and (d) deepening cooperation in law enforcement to fight cross-border crimes as well as illegal gambling, combating human trafficking, as well cyber crimes to ensure sustainable development.